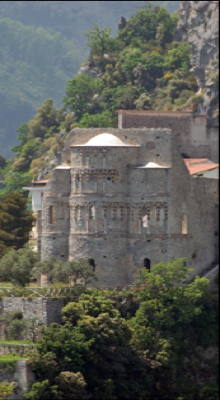 This website was created to collect, host and display images made by travelers, mapmakers, historians, architects and artists of medieval and early modern monuments and cities of Southern Italy. It includes prints, drawings, ground plans and elevations, paintings, photographs, and any other type of image of sites from roughly 1100 to 1450. The image sources include public and private collections, museums, libraries and archives, print books, and online resources. This project expands as new images are found and cataloged. These images range in date from the late Middle Ages through the mid-twentieth century. Southern Italy includes the regions south of Rome and Lazio, including the Abruzzi and Sicily. We have retained the original name “Kingdom of Sicily,” rather than “of Naples” since this was first used by its Norman creators, who began their rule in Apulia and Calabria, then conquered Sicily before taking the rest of the South. This usage continued into the modern period.

Entries in the database are indexed by location, artist, and collection. However, recent images, produced or published after c.1950, including architectural plans, photographs, and reconstructions, can be found as part of the "Visual Docs" category for each monument represented.

Historic views of southern Italian buildings are important historical documents because this geographical area has been deeply affected by earthquakes, volcanic eruptions and World War II bombardment. In addition, urban renewal projects (such as the Risanamento in Naples) and nineteenth- and twentieth-century restorations have often been driven by polemical or ideological interests, sometimes removing entire monuments or destroying features of interior decoration, such as pulpits, tombs, and other church furniture. Above all, rapid and often uncontrolled urban expansion and industrialization in the post-World War II period has transformed the profiles of southern cities, often submerging significant monuments within a sea of modern buildings and development, a process that obscures the original importance of these sites as markers of political, social, and religious authority.

The database aims to enhance knowledge of Southern Italy, the historic Kingdom of Sicily, and to serve as an aid in study and research, as well as understanding the many changes to buildings and cities over time. Since we cannot anticipate areas of research interest, the database is as inclusive as possible within the chronological parameters of c.1000-c.1450. We include images of cities and monuments, and of interior furnishings, such as tombs, altars, mosaics, ceilings, pavements and frescoes.

The website is not intended to provide comprehensive historical information on sites, artists, or images. It is designed simply as a repository of visual materials and conduit to further research. Our purpose is to make hard-to-find images accessible to scholars and the public. The images in the database are intended for study and information, not for publication; they are therefore available at low resolution. Users should contact the original repositories of images (indicated by hyperlinks) for reproductions and permission to publish. It is important to note that the catalogers cannot be experts on every topic included, and that the images do not necessarily provide complete documentation about a site, as some artists or architects may have enhanced views or suggested hypothetical reconstruction or improvements: all images should be verified against either textual or visual resources for accuracy.

The database and website represent the work of many dedicated volunteers, students, staff, and faculty. We ask all users to cite this resource in their publications as "[identification of specific content], The Medieval Kingdom of Sicily Image Database, Duke University, http://kos.aahvs.duke.edu/. Used pursuant to a CC-BY-NC 4.0 license."

We gratefully accept suggestions and corrections from users; to do so, please use the "Contact Us" link.